Eminem Opens Up About Surprise Performance At The Oscars 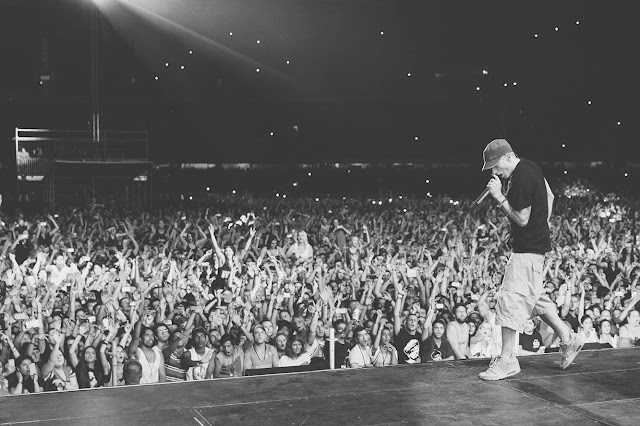 Shortly after performing "Lose Yourself" at this year's Academy Awards, Eminem spoke to Variety via phone to talk about the surprise performance and why it was so important to keep it a secret.

It was a pretty elaborate band, with several musicians and a string section. How long did you rehearse?

We flew in [to Los Angeles] last week, so we probably have four or five
rehearsals just to make sure we got everything right. Most of the rehearsals were offsite, not in [the Dolby Theater], just trying to keep it secret.

Why was it so important to keep it secret?

I don’t know, I think it was either [the Oscars’] idea or Paul and [longtime publicist Dennis Dennehy’s] idea before they brought it to me. It was presented to me that way and I said, “Oh that’s kinda dope, to not even announce it.”

During the interview, Eminem also listed Young M.A and YBN Cordae as some new names he's impressed with.

"Well, we had Young M.A. on the album, and she’s definitely one of the new artists that I’m super excited about — every time she puts something out, I listen. And the guys we have signed to our label, [Buffalo, N.Y. rap trio] Griselda, that’s exciting. YBN Cordae, he’s dope.

Eminem won an Oscar for Lose Yourself back in 2003 but he failed to attend the ceremony. The award, which was presented by Barbara Stresisand was received on his behalf by Luis Resto.

Look, if you had another shot, another opportunity... Thanks for having me @TheAcademy. Sorry it took me 18 years to get here. pic.twitter.com/CmSw2hmcZo
— Marshall Mathers (@Eminem) February 10, 2020


The full interview where he discusses working on "8 Mile" and whether or not he plans on doing more movies can be read over at Variety.
Tags Eminem NEWS