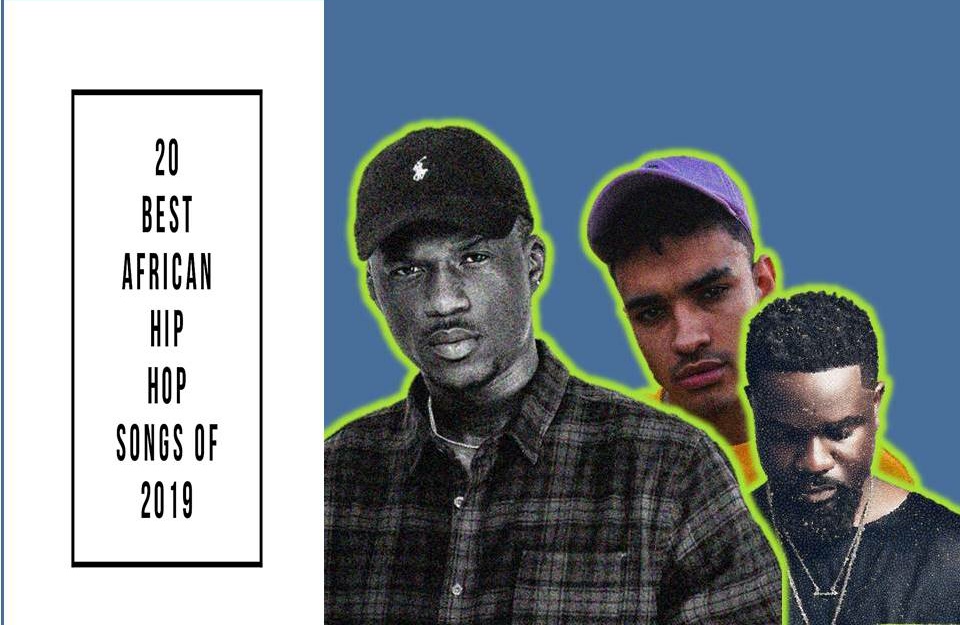 2019 wasn't the most prolific year for North American hip-hop but African hip-hop thrived. The continent experienced one of its best years musically with a ton of great new records/projects from a plethora of artists. The competition over the last 12 months has been exceptional in comparison to previous years.

Spearheaded by the Nigeria vs South Africa debacle as well as Paperman's Top 50 African Rappers Of All Time List. There was no shortage of discussions, controversies and tongue in cheek moments. South African rapper, AKA took on the entire Nigeria entertainment industry after he was wrongly accused of Xenophobia. Khuli Chana made his long awaited return, Sarkodie made history by becoming the first recipient of BET Hip Hop Awards' 'Best International Flow' award and Cassper Nyovest declared himself an all time great.

Selecting the top tracks across Africa can be overwhelming at times. So many new songs get churned out on a daily, and so many factors to contend with, but these songs simply standout above the rest.  In typical tradition of celebrating our African hip hop heroes, Creative is highlighting the 20 best  African hip hop songs of the last 12 months. [Our favorites].

Joey B is one of the hardest working African rappers around. Despite not releasing any album in 2019, the Ghanaian kept himself busy with a multitude of guest verses. After lending his talents to half of Ghana's music industry, Joey finally delivered his first single of 2019. Released in July, "LA Familia" featuring Kwesi Arthur and Sarkodie finds the trio revelling in their come up.

Ice Prince enlists the help of some of Africa's hip hop finest for the remix of his bubbly record "Feel Good." Although the record failed to reach projected heights,  It is still one of the most memorable African hip hop tracks of 2019. The original version featured fellow Nigerian rappers, Falz and Phyno.

Before delivering his Black Love LP, Sarkodie let one fly for us rap nerds. Bleeding is a standout track from the Ghanaian rapper's Alpha EP. Can your speakers handle the bass?

Kwesi Arthur 's uplifting song 'See No Evil' was one of the standouts from his "Live From Nkrumah Krom Vol. II: Home Run" project. This was an instant favorite on first listen.

Being a victim of abuse herself, Gigi Lamayne takes on domestic violence on Koze Kube Nini - A standout track from her impressive EP Job Woods. A much needed message from one of Africa's most underrated rappers.

Keep your hands to yourself. Say NO to violence.

After receiving some warranted criticisms from hip hop critics for his recent lack of rapping, AKA showed that he is still very sharp on the outlandish "Main Ou's" featuring fellow South African, YoungstaCPT.

"Paris" Brings two of Africa's most promising young rappers together. No rivalry, just bars. The collaboration contains the best elements from both artists: Shane Eagle's reflective, yet confident rhymes, and Nasty C's brag-fueled one liners.

"I am the GOAT on the low
I keep the guns on the floor
I used to sleep all on the floor, now I hear the round of applause
So I flew myself out to Paris, now I be running the streets
I send some bread to these niggas, now they be actin' like leeches."

Sometimes an old school rap duet is all you need. Sark allows Ebony Reign hug the spotlight on this posthumous collaboration. This may not be popular with our readers for obvious reasons, but it's a great record and another Alpha EP favorite.

Kid Tini managed to get styles P and Stogie T on the same track for some rappity rap. While Styles expectedly turns in a very solid effort, Tumi shows again why he's regarded as one of Africa's greatest. Kid Tini went bar for bar with these veterans and he ate.

UG's Most Wanted Chapter One.

UG's Most Wanted is a statement and a conversation starter. Byg Ben, Tushi Polo, Tucker HD, J-Wats and Play01 delivered 20 bars on the first Chapter of the Josh SB produced track. Feel free to run this back a few times.

Five years after the release of their smash hit "Skhanda Love," K.O and Nandi Madida (formerly Nandi Mngoma) reconnect for a sequel. Just like their previous link up, "Say U Will" - which is an ode to lovers - features Nandi's spacious vocals and K.O's swaggalicious rhymes. Say U Will was K.O's first number one record in five years.

"Top ten, I'm not ten, I'm top one/Look at my score, and I told my niggas we got one/I see the shade they throwing but you can't block son/I shine so bright that I even glow in the dark, son/The stadium is sold out, the merchandise is sold out/I did all in two weeks, I did with no roll out."

The Nigerian rapper of the year, without contest goes to Blaqbonez. We can debate this whenever. After appearing and holding his own on records with some of Nigerian's rap heavyweights including M.I Abaga, Falz and A-Q. Blaq crowned himself the Best Rapper In Africa in this audacious record.

A lot of Nigerian rappers were harmed in the making of this record. "I don't even care if y'all want make me as the motherfucking villain here/Snapping like Thanos, the game's never been this alive/The shit I do for the culture, when is it gon be scrutinised/Every moment for rapping 2(0)19 has Blaq in it." - Sounds about right.

Durban rapper, Duncan tackles social issues including drug abuse, rape and unemployment on his heartfelt single "Sikelela" featuring Thee Legacy. The overall message of the song makes it a worthy addition to our end of the year list.

This summer it was hard to escape the melodic menace of "Hello." Built around a simple message and an infectious hook, Hello served as Beast's first single under Afrontainment. Sjava pivots what could've easily been a forgettable song into one of the most interesting tracks of 2019.

Ahead of the release of his yet to be titled debut album, Gemini Major combined forces with fellow Durbanites, Nasty C and Tellaman for what eventually became one of the hardest African rap joints of 2019.

I first heard of this song when I attended the Afrima Business summit in Lagos, Nigeria back in October. I didn't know what it was, neither did I have an idea of how big it would become.

Ugandan rapper, Big Trill took 2019 by storm with his viral single "Parte After Parte." The song cracked the top 10 on Nigeria's Top 100 iTnes chart and became the theme and soundtrack to every major event across Africa. Even Cardi B caught the bug. It's an epidemic.

Nigerian rappers M.I Abaga and Vector immersed us with the most entertaining rap beef of 2019. After baiting M.I with "The Purge" freestyle, Vector went for the kill with "some uncomfortable facts" on Judas The Rat.

This track is great because it flips on its head some of M.I's questions on 'The Viper.'

Slow burner, which almost didn't make the cut. It was either this or "Legend" by Sarkodie and Joey B. We settled on this.

With Rich Homie Quan supplying the hook, Kwesta took listeners on a retrospective journey of his success.

Hip hop in Africa, for the last three to five years have been dominated by south Africa. However, in 2019 Nigeria stepped up. The quality of releases still wasn't much to be proud of but the competition was at an all time high. MC's verbally fought for the throne and several beefs (albeit friendly) ensured. M.I had always been deemed untouchable by majority of Nigeria's hip hop populace but for the first time in his career he was rocked .

After a crazy few weeks filled with ifs and buts - aided by mounted pressure from hip hop listeners pushing for a rebuttal to Vector's "The Purge." M.I succumbed and answered Vector's call with a diss track of his own. It proved to be the wrong move.

M.I borrowed a page from Sarkodie's "My Advice" and played a fatherly role on this record.