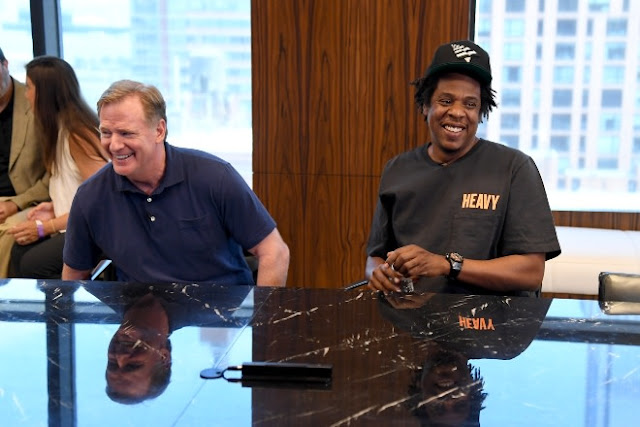 Hov continues to make money moves. TMZ Sports reports the rap mogul is on the Verge of becoming part owner of an NFL team.

Sources close to the veteran rapper claim he is going to have "a significant ownership interest" in an unspecified NFL team "in the near future."

Hov reportedly wants to be part owner "because he's a huge fan, already has a sports business and wants to continue to be a change agent for the NFL."

JAY was previously a minority owner of the Brooklyn Nets.

According to multiple reports, Roc Nation will serve as the NFL’s “live music entertainment strategist,” which includes consulting on productions such as the Super Bowl halftime show.

“The NFL has a great big platform, and it has to be all-inclusive,” JAY told the New York Times. “They were willing to do some things, to make some changes, that we can do some good.”

During a press conference on Wednesday, August 14, reporters asked JAY if Colin Kaepernick was involved in the new deal.

Hov has been one of Kaepernick's biggest advocates on his fight against police brutality and racial injustice in America, so JAY's aforementioned comments and partnership comes as a surprise and is rightful under scrutiny. The rapper once wore a custom version of Kaepernick’s jersey when he performed on “Saturday Night Live” in 2017.  On APESHIT off his joint album with wife, Beyoncé, he rapped the now famous lyric: "Once I said no to the Super Bowl: You need me, I don’t need you. Every night we in the end zone. Tell the NFL we in stadiums too.”


The NFL is keen to portray the deal as a way to bring more high-profile entertainers to its events, following its fall out with the black community and most noticeably with former San Francisco 49ers Quarterback Colin Kaepernick.

"Everyone’s saying, ‘How are you going forward if Kap doesn’t have a job?’ This was not about him having a job,” Hov explained. “That became part of it. We know what it is — now how do we address that injustice? What’s the way forward?”

As per Rolling Stone, Roger Goodell, the commissioner of the N.F.L. was asked if the partnership is “disingenuous,” considering many people believe that Kaepernick was blackballed by the league.

“We talked about a variety of issues. I think when we first met we talked about entertainment and how we do that, but the number one thing we went to was impact,” Goodell explained. “We can have an impact together. We can do some really positive things in our community. So to go to Jay’s point, we listen to our players. We understood what our players were saying and we created a platform, in which to help drive change in communities that Colin has raised and that other players have raised. This partnership in addition to the entertainment aspect of branded football and music together is going to help us make even greater change. We call it protest to progress.”

As part of the new deal, Roc Nation will advise the league on who will be performing, as well as creative directing the performance.

Juicy J announced on Friday, Aug. 16 that the Memphis group he co-founded, Three 6 Mafia will be embarking on a reunion tour.

According to the flyer shared on the rapper's Instagram, the tour called "The Return Of Three 6 Mafia" will feature Juicy J, DJ Paul, Gangsta Boo, and Crunchy Black with additional support coming from Bone-Thugs-N-Harmony, DMX, Project Pat, Lil Wyte and LA Chat.

Tickets for the reunion tour goes on sale this Friday, August 23rd.

According to The Athletic's Shams Charania, the Los Angeles Lakers are interested in bringing Dwight Howard back to the Staples Center.

The Washington Wizards traded Howard to the Memphis Grizzlies in July, and according to multiple reports, the Grizzlies is expected to waive the center before the season starts.

Charania reports the Lakers are expecting the Grizzlies to allow them to talk with Howard prior to him being waived. According to the report, Howard Is keen on the deal as well.

LA's interest on Howard comes in wake of DeMarcus Cousins' off season ACL tear. Boogie was signed  on a one-year deal from the Golden State Warriors to aid the Lakers title challenge alongside LeBron and Anthony Davis but is now out indefinitely.

Joakim Noah is also being considered as a possible replacement.

Howard previously played for the Los Angeles Lakers during the 2012-2013 season. During his stint with the Lakers, Howard, now 33 averaged 17.1 points and 12.4 rebounds.

Creative Weekly is a highlight segment of some of the biggest hip hop stories you may have missed. Be sure to follow us and subscribe for more updates.
Tags Creative-Weekly