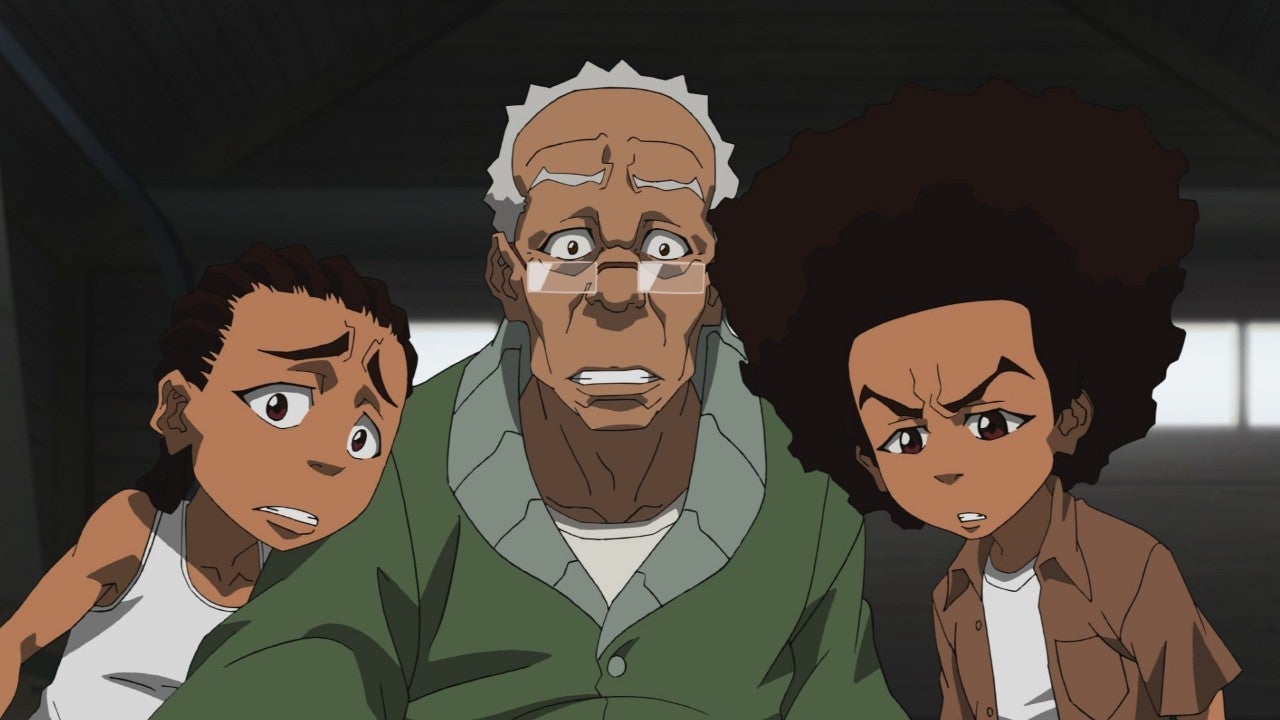 The Boondocks is set to return to TV screens, with creator Aaron McGruder.  Sony announced at the Annecy International Animated Film Festival on Wednesday (June 12) that a re-imagining of Aaron McGruder's hit animation series "The Boondocks" is slated to be released in 2020.

John Witherspoon, who voices Grandad in the cartoon first hinted about the show's long-overdue return during his appearance on The Joe Regan Experience podcast.

Variety reports the upcoming reboot "chronicles the battles of the Freeman family against the evil local government tyrant Uncle Ruckus, who rules fictional Woodcrest County Maryland, with an iron fist."

"The Boondocks" premiered on November 6, 2005 on Adult Swim. Sony handled production for all three seasons of the series. The fourth season, which I like to pretend never happened is the only season not to be directed by McGruder or produced by Sony.

Checkout the new character designs for Huey and Grandad below.

Nipsey Hussle's selfless service to his community hasn't gone unnoticed. The late Crenshaw rapper will be honored with the humanitarian award at this year's BET Awards.

“As a prolific artist and leader, Nipsey Hussle was zealous about driving change for the betterment of his community, empowering and employing those in need and being an influential and highly respected leader,” Connie Orlando, Executive Vice-President, Head of Programming at BET said. “We are forever grateful, humbled and honored to have experienced his presence and we are invested in doing our part to ensure that the marathon will indeed continue. It is an immense honor for us to recognize him with this year’s Humanitarian Award.”

DJ Khaled, YG and John Legend will perform a special tribute to the late father, brother, partner and philanthropist.

Before his untimely demise, Nipsey dedicated his life to empowering and employing underprivileged youths through several investments including science and tech centers for teens and real estate investments.

Nipsey born Ermias Joseph Asghedom was shot and killed outside his Marathon Clothing Store in his hometown of Los Angeles on March 3.

Hosted by Regina Hall, the 19th annual BET Awards takes place on June 23 at the Microsoft Theater in Los Angeles.

Seventeen years after the original The Lost Tapes dropped, Queensbridge legend, Nas has us all excited about a follow up. On Tuesday (June 12), the hip hop veteran took to Instagram to tease the long-awaited project. In the IG video below, Nas can be pictured wearing a white lab coat, holding a broken clay cassette tape with The Lost Tapes II written on it.

The tape was designed by New York artist Daniel Arsham, who also shot the teaser video. The original Lost Tapes was released in 2002. The project featured unreleased music from the recording sessions for Nas' 1999 album I Am... and 2001's Stillmatic.

The rap legend also plans on releasing a children's book inspired by his 2002 single "I Can." The book which features illustrations by Michael Lukowski will be released via Nas and Mass Appeal's newly launched kids brand MAJR.

A mission statement posted on MAJR's website reads: “Our mission is to inspire future generations through the creation of unique toys, apparel, and innovative learning tools. Major is here to reflect the diverse hues of both the modern family and popular culture, because education starts in the crib.”

A release date for the book is yet to be announced.

Creative-Weekly is a highlight segment on some of hip hop's biggest moments you may have missed.