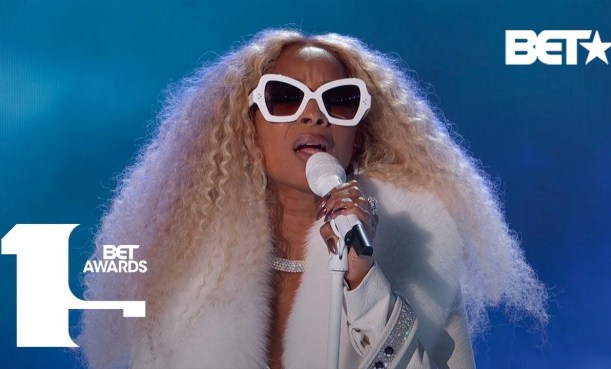 If you missed the show, then we got you. This week's Creative Weekly highlights some of the most memorable happenings at the event.

"Old Town Road" remains No. 1 on the Billboard Hot 100 chart for an 11th straight week.

The Queen of Hip-Hop soul, Mary J. Blige was presented with a Lifetime Achievement award at this year's BET Awards. Following a heartfelt speech from music's richest woman, Rihanna - Mary took to the stage to perform a medley of hits including "My Life," "Real Love," "No More Drama," "I'm Going Down," "Love No Limit," and "I Can't Love You." The Grammy-award winning singer/songwriter/actress was assisted on stage by Lil Kim, Method Man and her iconic dance moves.

“People always ask how do I sustain and stay relevant in this industry,” Blige said while accepting her award. “It’s because although I am a leader, a queen, a living legend, although I’m all of these things, I’m a servant as well and I’m here to serve. Being a servant is not always glamorous or popular, but it’s the job and assignment I was given. It’s because in order to be an authority, I had to learn how to come under authority. It’s because when the glory is placed on me, I give it back to God immediately. This journey has always been bigger than me and my job is not only to survive, right now it’s to thrive and continue to make history while I do it.”

Cardi B, who won "Album Of The Year" at this year's BET Awards was the curtain raiser at the ceremony. The "Money" rapper took to the stage to perform her newest single Press as well as Clout with Offset from his "Father Of 4" solo debut album.

Earlier this week Cardi was reportedly indicted with 14 charges, including two counts of felony attempted assault with intent to cause serious physical injury, relating to her involvement in a fight at a Queens strip club last year. In a now-deleted Instagram post, Bardi blasted TMZ and its founder Harvey Levin for going “out your way to report shit on people in the urban culture and even make shit up.”

"I never did jail time, I don’t have NO CRIMINAL RECORD but they want to drag this case because they want fame and they want press .Waste people tax money on a bullshit case a MISDEMEANOR CASE,” she added. “I don’t understand how I been to court 6 times for a misdemeanor a fucking MISDEMEANOR and now you try to upgraded to a FELONY E the lowest of the low cause I refuse to agree to ya terms !!!”

Nipsey Hussle, born Ermias Davidson Asghedom was honored with a posthumous humanitarian award at the 2019 BET Awards. The award was presented by T.I. and was received by Lauren London, Nipsey's father Emit Asghedom and mother Angelique Smith.

During her spirited speech, Smith detailed the contrasting feelings she felt after arriving at the Marathon Clothing Store in Slauson, the scene her son was shot and killed on march 31.

“One of Ermias’s close friends was very traumatized,” she recalled in part. “I walked over to him and put my hands on his shoulder, and I told him, ‘Evan, look into my eyes, Evan.’ I said, ‘You know that we are spiritual beings having a physical experience, right Evan? You understand that, right?’ So even though our bodies die, as they call it on this side of eternity, our spirits lives."

Hussle's grandmother, 88-year-old Margaret Boutte, told fans, “I was so amazed at how much love was out in the world for him that you up lifted me. I accepted his life as God said, ‘Nipsey, you've done your job, you have left your mark. I'm welcoming you into Heaven so you can rest.’ I loved him with all my heart and soul. Thank you so much for loving him too.”

Nipsey Hussle received a passionate tribute at the 2019 BET Awards. Marsha Ambrosius kicked off the tribute with "Real Big" from Hussle's Grammy-nominated debut album Victory Lap. YG carried on with "Last Time That I Checc'd," also from Nip's debut album.

With help from a choir, Khaled concluded the segment with his "Father Of Asahd" single "Higher" featuring John Legend.


Cardi B cleaned house. Checkout the full winners list below.

Video of the Year
Childish Gambino - "This Is America"

Album of the Year
"Invasion of Privacy"
BET Her
H.E.R. - "Hard Place"