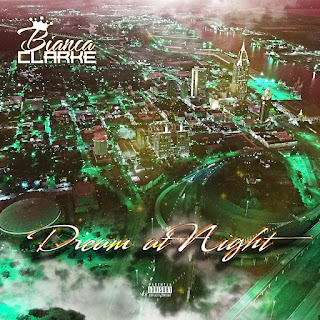 "Dream at Night" is Bianca Clarke's latest single release and is one of the singer/songwriter's most personal records to date. After the passing of her beloved grandmother, Callie Eldridge Lambert, Bianca dedicated the song and video to her by featuring footage from the funeral and performing the entire video on location at her grandmother's home. Director Alex Young brings the Yung Blokk constructed record to life and finds Clarke unloading her feelings via rooftop with exquisite drone footage of the city lights blended in. Celebrate the new year with Bianca Clarke and her latest below.

Bianca Clarke was born in Mobile, Alabama on May 31st, 1992. At a very young age, her grandparents had her highly active at church. Bianca first started out singing while in attendance. This experience is what would lead her into honors chorus while attending Leflore Magnet High School and ultimately lead Clarke to songwriting. Aside from her grandparents, Clarke's aunt happened to be the lead editor at the local paper. When the time came, she would help Bianca sharpen her reading and writing skills. Then in the summer of 2010, Bianca packed up and made the leap of faith in her career to relocate to one of urban music's hottest areas, Atlanta, to attend the Art Institute of Atlanta for a degree in Audio Production.

While attending, she made the decision to pursue music full time. Bianca began grinding the open mic and showcases circuits in hot pursuit to build a buzz and name for herself. Shortly after, she returned to Mobile in high spirits and began showcasing the incredible talents she had garnered while in Georgia. Soon after, she caught the attention of Splash Life Booking and the partnership began growing from that point forward. This opened the door for Clarke to become tour support for artists such as Trina, Chanel West Coast, Young Dolph and Gucci Mane. With the newfound success, a production deal with Spalsh Committee was birthed. In addition to these accolades, Bianca has received 14 miscellaneous awards from shows in Alabama, Florida and Georgia.

Along with her latest release, "Dream at Night", the entertainer is hard at work fine tuning her debut project titled "Holy Trinity". Stay tuned to her website and social media profiles for updates, pictures and much more.