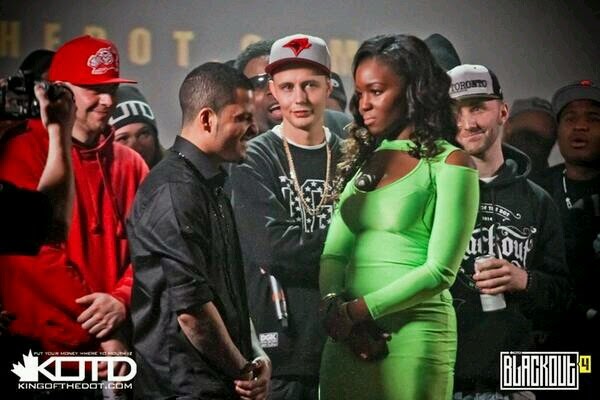 Bonnie Godiva as am sure you're aware is a female battle rapper. She takes on Uno Lavoz in King Of The Dot's Black Out 4 event. Who got bodied?

Still relatively new on the battle scene, Bonnie Godiva has only begun to see her momentum pick up in the last 12 months. The NYC battle rapper has done more than her fair share to help blaze the path for female emcees in a still mostly male dominated scene, as shown by her work ethic over the past year. Featured heavily in both Queen of the Ring and King of the Dot, Bonnie has been in the ring almost a dozen times in as many months, squaring off against the likes of Germ Free, Dutchess and Young Gattas. Still in the process of evolving her style, Bonnie has shown that she can switch seamlessly between clowning her opponent with her clever wit and humor and overpowering them with hard hitting punches. Back in Toronto for the second time, Bonnie Godiva takes part in one of the very few male vs. female battles ever.
If success as a battler was measured strictly by number of battles in a relatively short amount of time, Uno Lavoz would be one of the best of all time. Over the course of the last three years, Philadelphia's Uno Lavoz has battled over fifty times all over the world, including Canada, Australia, and the U.K. With a resume that includes high profile opponents such as Johnny Storm, F.L.O. and Henry Bowers, Uno has never been one to back down from a challenge. Most well known for his outrageous humor, Uno Lavoz is also able to deliver devastating blows to beat down his opponent. A crowd favorite in Toronto, Uno returns to appease his fan base and take on Bonnie Godiva in this next release from Blackout 4.