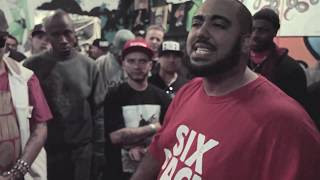 Best known from his battles in Grindtime, Yung ZM, known these days as simply ZM, has been trading punches with opponents in the ring for more than 5 years. A product of Philadelphia, ZM got his start against now well established battlers such as Swave Sevah, Fox, and Surgeon General. Also known for his 2 vs. 2 battles with fellow Philadelphian Rone, the pair partnered up to take on DNA and Soul Khan as well as Sonny Bamboo and Real Deal.
Since then, ZM has moved to an international audience, appearing heavily in King of the Dot as well as some battles in the UK. A hard hitting battler, ZM mixes humor with bars when picking apart his opponents. Making his return to KOTD, ZM matches wits with Cadalack Ron in this Day 1 battle from Battle of the Bay 6.Also a veteran of this battling business is the Fresh Coast's own Cadalack Ron. More than 4 years deep at this point, Caddy came up alongside fellow his West Coast vets, notching battles against heavy hitters such as Caustic, Rheteric and Dirtbag Dan. Always staying involved with the scene, Ron has certainly gotten more active as of late, amassing more than a dozen battles in the past year alone. A unique personality, Cadalack Ron brings his trademark slow flow and druggie drawl to every battle, winning over crowds with his specific style of humor and knockout haymakers. Returning for his second Battle of the Bay appearance, Caddy Ron squares off against East Coaster ZM in this next release from BOTB6

Who got out punched?