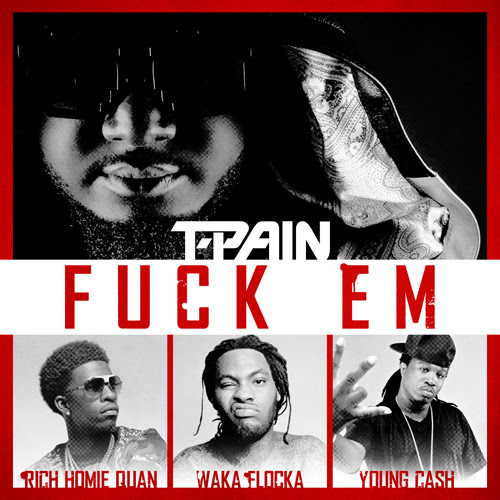 T-Pain been teasing this track all week. Check it out and read what he had to say concerning the song below.


On the title “Fuck ‘Em”:
I just like the word “fuck.” It’s a nice sounding word that gets the point across. I have a gang of songs with “fuck” in the title. I don’t know why. I just really like that word. Rolls off the tongue [Laughs].
On the guest spots:
I’m willing to work with anybody that comes through. People come through the crib all the time. I show them records. Shit that they get real excited about, I just lay them on there. I don’t like the go to artists which songs that I think should fit them. I want them to be excited about the record. I showed them my whole 100 or something songs until I know that they really, really like a record and they like to be a part of it. I want them to be just as excited as I am about a project. Rich Homie and Waka—basically got excited about the same song so I said “why not?” And keep it pushing. I am not going to deny someone that they are really excited about. Even if I don’t want somebody on a song, I’ll let you put on a verse on it just to have it.
Young Cash has been a Nappy Boy representer since day one. He was actually the first person I signed to Nappy Boy Entertainment. I think it’s really time to focus on my artists and stuff like that. And really go in on making their career big. He just signed a deal with eOne. We are really trying to push him at this point and let it be known. Cash in the building.
On what to expect:
I am just talking shit. Just a daily dose of shit talking for anybody who needs that motivation in the gym or in the streets. There isn’t [any] specific context or anything. It’s just, you know, fuck ‘em. If you don’t like something? Fuck ‘em. Fuck somebody? Fuck ‘em. If you don’t like the kind of cereal you got? Fuck ‘em
Tags MUSIC Rich Homie Quan T-Pain Waka Flocka